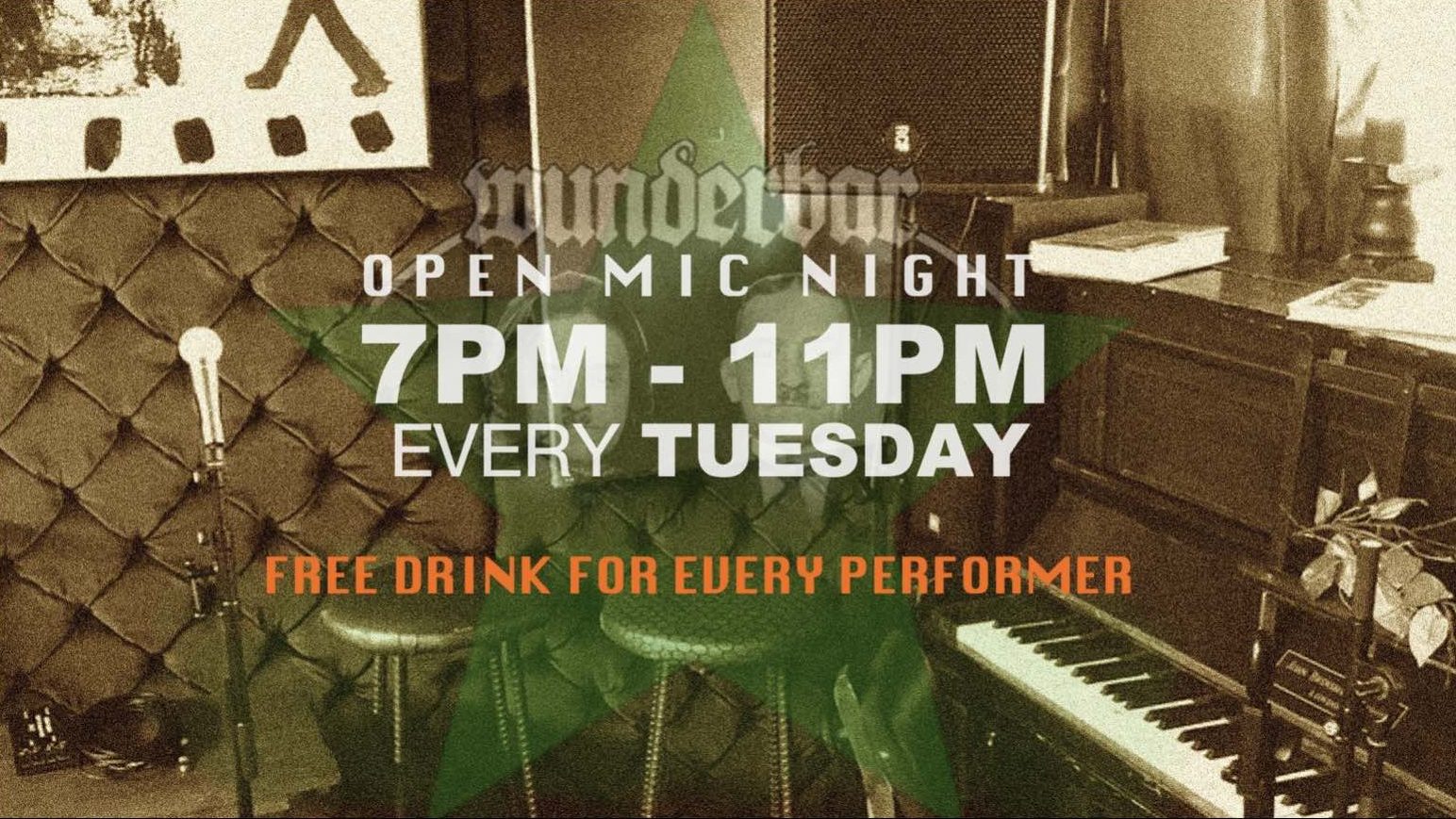 Starring some of our best local talent and professionally mixed by DJ Sam Wally.

All performers get a complimentary drink and, if you bring an empty USB stick, we'll even record your performance for you!

BEN HURLEY: THE STRAIGHT OUT OF LOCKDOWN TOUR

One of the most recognisable and hairy comedy faces to come out of New Zealand is coming back to Wunderbar!

Ben Hurley!! Winner of all of the awards! The Billy T Award, The Fred Dagg Award, Comedy Guild 2016 Best Male Comedian & Best MC and Metro Comedian of the year, Ben has been smashing comedy out of the park since a long time ago.

He's also appeared on numerous TV shows including the eleven NZ Comedy Festival Galas, four AotearoHA Comedy specials, Funny Roots and Would I Lie To You.

Ticket sales will be limited so get in quick!!

Shannyn hasn't been the same since a rather rambunctious German sparkle dance party in the weekend. Unfortunately he has started to believe that all cats are plotting against us. He is quite fortunate that he himself does not live with a cat. However, he has become suspicious about their tendency to sleep all day and is questioning what they get up to when they are outside.

In his own words, "It's like the lion king Davey boy. They don't just punch you off a cliff and call it a day. They prolong it and savour it."

He was caught in conversation with Andre yesterday stating "Cats paw, bite, claw and scratch their owners as target practice. This is for when push comes to shove and they finally have the opportunity to strike us in our sleep. They will be well rested and calculating. They will not miss."

Andre asked Jack for his opinion on the subject and he replied that "Maybe that's why cats don't get on with mice, birds or dogs..... Those animals are onto the cats"

This just perpetuated the problem.

The crew tried to track down Gareth Morgan and his crew for emotional support but he was nowhere to be found. We talked to some jazz cats but all we got from them was "Yeah man" and "In the pocket".

Michael and David continued to look for external help and met up with Aaron Caldwell and his band Delta Storey. Aaron suggested that their leader is another famous musician who changed his name to hide his identity.

"He is subtle in his lyricism, he says things like 'ooo baby it's a wild world" and convincing his listeners to distract themselves by saying 'It's not time to make a change, just relax, take it easy"

With a moment of clarity Peter, Delta Storey's drummer, insisted we all head down to Wunderbar to play the gig of our lives and raise awareness of this ever-increasing problem.

"The seasonal mulled wine outta sort these boys out" suggested David to Michael.

Come join and give them the support they need to get them back on their feet. It'll be a free entry!

Internet Death celebrates the release of his digital hardcore debut, "NOT YOUR DOG!".

Come celebrate with him and co as he unleashes his chaotic energy on the stage of the Wunderbar, fueled by current events and dickheads.

With sets from the lovely:

Door sales will be available but price hotter so grab you tix now.

To celebrate the release of his new single ‘Neverland’ - Big Sima has decided to bring down fellow collaborator and bff Jake Bartos (Summerthieves) to bless us with an acoustic set that will light the house on fire quicker than a 3 year old with box of sambas.

As well as the Malibu Machine, we are delighted to report that Lyttelton local MC ‘And$um’ aka the Brittan Terrace Badman will be blessing the support duties fresh off the release of his debut album and one a hell of a 2019.

And of course your favourite Afro sporting, wave catcher Dj Lure will be on the wheels of steels with more bangers than a sausage factory!

So strap on your back pack, dust off your Jordan’s and prepare yourself for a night of beatbanging hip hop and acoustic brilliance.

TIM ALLEN: THE LAST BASTION OF A LAD TOUR

The Last Bastion of a Lad. Now THAT’s a rock’n’roll title for an album. Say it in a Lancashire accent, with its resounding assonance and pithy plosives, and it truly sums up Tim Allen’s geographical and psychological journey thus far.

It’s an album title that connotes an easing up on the wild life, putting one’s larrikin ways to bed, growing up.

This sophomore song collection runs the gamut of life experiences; from the loss of a loved one, ‘Joan Don’t Go’ to the rollicking but wrenching feeling of displacement in ‘Different Shore’ to being diagnosed with adult ADHD, ‘Won’t Let You Win’, this UK born Auckland based singer-songwriter is reassessing his life as he lays it bare, dressing it in firmly rooted Brit-pop leanings with a smattering of kiwi spit and polish.

Tim's The Last Bastion of a Lad U.K tour was set to go ahead next month before Tim headed to France and returned to N.Z. via Asia for a string of dates, but unfortunately due to the Covid-19 pandemic, Tim's U.K tour has been postponed until further notice.

The Last Bastion of a Lad is now available on Spotify, iTunes, Apple Music and all good digital sites.

"This album is set to receive critical acclaim, and deservedly so." **** Muzic.net.nz

"His music reminds us of Oasis, Blur, David Gray. This is an album that grew on me pretty quickly, being packed with evidence of life experiences." ambientlightblog.com

Kickass night of dancing to The Convincers and fab rockbilly DJ Tony Clarke.

A fun, high energy, foot stomping night of rockabilly and rhythm and blues.

Can't wait to see ya!

Wunderbar Comedy Night is back and better than ever!!

Come along to Christchurch's most unique little bar for an evening of laughs nestled in the the grooviest back room you've ever set your eyes upon.....plus just the right amount of disco balls!!

This show opens with a professional comedian as your host who will guide you through a collection of open mic comedians.
Then to finish, another pro to make sure you're filled to the brim with laughs!

Keep an eye out for our act announcements!